During three years, Charles Aubry visited Alain Dostie, collision shop owner at FixAuto Magog. He saw the shop’s potential, and during each visit, he tried to convince him that he could further boost his performance if he would use ProgiPlanning.

During three years, each time, Alain thanked him for visiting but politely refused his offer.

One day, he had a change of heart and finally accepted Charles’ offer. In doing so, his shop went through exceptional growth in the span of one year.

What explained his refusal to consider the offer? Why did he change his mind? Was the transition difficult? What were the benefits? Here is Alain Dostie’s story.

Alain Dostie’s professional journey was rather linear. For as long as he can remember, he has always been around the world of car repair, since his father is himself a collision shop owner under the ProColor banner. He had a few small jobs in his early years, but quickly started working part-time in the family business. After completing studies in administration, he realized he enjoyed the auto repair business and wanted to make it his career. His father and brother, who was in the business as well, gave him the necessary training, after which he started working full-time.

In 2015, he had the opportunity to buy shares in FixAuto Magog, and jumped on the occasion. Since FixAuto was a competitor of ProColor this required a transition period, which lasted a few months. He had to relearn his craft, so to speak, since the procedures and business practices were quite different.

Through the years, he and his partners received numerous proposals for I.T. solutions, which were supposed to improve their collision shop’s performance.

Through the years, they tried many of these improvement projects, with mixed results. The solutions usually ended up being incomplete, difficult to implement, or inefficient. They eventually became jaded and wary of these proposals, as most likely did many of their colleagues within the industry.

As such, when Charles Aubry visited Alain Dostie, the door of his mind was completely closed, with a big “no soliciting” sign in front of it. Because of that closed mind and wariness, he never seriously considered Charles’ offer, and much less studied the project. 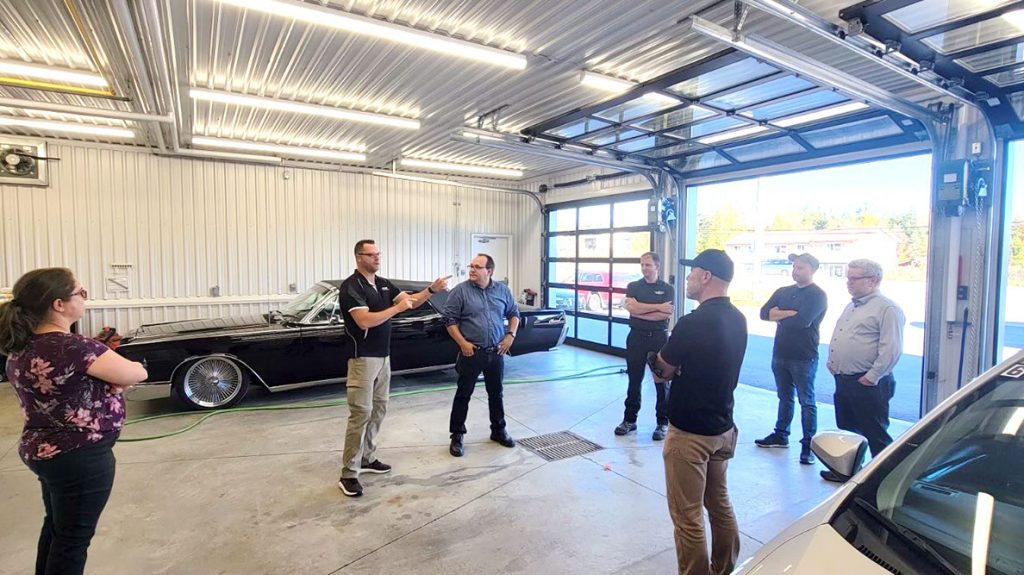 But Charles was persistent. After FixAuto Magog expanded and opened new facilities, he visited the shop once more, this time with members of the ProgiElite group. As a reminder, this training group brought together several actors in the industry, engaged in a continuous improvement process: they visited each other’s shops, pooled their knowledge together and shared their expertise.

This visit was a turning point. The group’s discussions and the questions they asked of him made Alain realize that the project actually seemed much more useful, efficient and complete than what he was expecting. In particular, members of the group had detailed data about their production and activity, which was not the case for him. Once he realized the potential, he went back to Charles and told him he was ready to take the next step. He joined the training program and participated for almost a year.

He didn’t expect that integrating ProgiPlanning into his shop would go so smoothly, and without a hitch. Charles gave training to his employees, and they quickly saw the potential. They followed a chart, which simplified things rather than complicate them. Improvements started coming after only a few weeks. For Alain, the software is like an assistant. It is simple and efficient; it helps optimize appointments, and keeps him aware of his shop’s daily capacity. Especially, this assistant connects all stages of the process together, which, according to him, is often a flaw in other products of its kind.

To those who are wary or jaded by I.T. solution offers, as he was, and to those who are doubtful of ProgiPlanning, he would recommend setting preconceived notions aside and take the time to study the product.

Alain Dostie’s story is remarkable: by opening the door to ProgiPlanning and by following all the guidelines, his collision shop reached spectacular results. ProgiPlanning, indeed, was one of the main reasons he was able to increase his sales by more than 30% in the span of a year, and that with a single paint booth.